TripSmarts » Destinations » Which Disney Park should you visit? Which Disney Park should you visit?

There comes a time in everyone’s life when you need to make the decision to respond to the call of the most magical place on earth. Whether you’ve grown up with Mickey, Simba and Buzz Lightyear, or you’re just looking for some theme park fun, we’ve created a guide to the different Disney resorts and parks around the world to help you make the right choice.

In general, Disneyland is a great option for families, offering a good mix of fun for the little ones and a few exciting rides for the young at heart.

The first Disney park in the USA, and indeed the first in the world, Disneyland in Anaheim has a special place in many fans’ hearts. In addition to the traditional Disney attractions, Disneyland also has a big focus on the Star Wars franchise, with a number of galactic adventures to enjoy from the Hyperspace Mountain ride to the Jedi Training: Trials of the Temple show where younglings can learn to wield a lightsaber.

The California Adventure Park combines Disney and Pixar characters with a nod to the state’s heritage, making for an experience unique to the Golden State.

The cost of a one-day pass to either Disneyland or California Adventure Park can vary depending on the time of year between US$97-$124 (AU$130-$167). However, if you purchase a three, four or five-day pass, you’ll also get an included early admission to the park. The staggering size of this park means there is truly something for everyone. Kids will love the character interactions in the Magic Kingdom, while adults will especially enjoy the more thrilling rides at Hollywood Studios such as the Tower of Terror and the Rock ‘n’ Roller Coaster.

The biggest difference between this and all other Disney parks is the sheer scale. Walt Disney World covers some 100 square kilometres, and encompasses various parks within the area. These include:

One of the smaller Disney parks, Hong Kong Disneyland Resort focuses on a mainly family-centric experience, with a few bigger rides such as RC Racer and the Iron Man Experience to satisfy thrill-seekers.

Unique to Hong Kong Disneyland is the Ironman Experience, opened in January 2017, which allows visitors to go on a virtual flight through Hong Kong as well as an in-person encounter with Iron Man himself! Mystic Manor is a considerably different experience compared to other Disney park haunted house attractions – focusing on a more fantastical, less ghoulish theme.

As expected, you’ll also find a range of unique foods at Hong Kong Disneyland to reflect the cuisine of the Asian region, from Disney dim sum to bento boxes.

Unlike the US, Hong Kong Disneyland has different pricing brackets for children (3-11 years), adults (12-64 years) and seniors (65 years and older). While there is a big focus on the classic Disney experience for younger guests involving everyone’s favourite characters, Disneyland Paris has plenty to offer adult visitors. Big thrill rides include Big Thunder Mountain and the exciting Indiana Jones and the Temple of Peril, not to mention the new addition of Star Tours: The Adventures Continue – a ride that changes from one session to another.

Disneyland Paris is the only European Disney park, and offers visitors a touch of magic just 45 minutes away from the capital of France by train. While the Disneyland Park incorporates many familiar themes from other Disney destinations such as Phantom Manor, Adventureland and Main Street U.S.A., there are a number of distinctly French touches, such as an attraction dedicated to the film Ratatouille, set in Paris. If you look closely, the main Disney castle here is modelled off the one used in the film of Sleeping Beauty, originally a French tale, La Belle au bois dormant.

Furthermore, the Walt Disney Studios Park gives visitors a unique chance to learn more about the animation process at the Art of Disney Animation as well as a behind the scenes experience at Studio Tram Tour.

For a one-day adult ticket, prices range between €49-88 (AU$70-130) depending on whether you want to see one or two parks. A family of four with two adults and two children (ages 3-11) can expect to pay €554 (AU$824) for a two-day ticket, although there are a number of other package deals available. There is a good balance between kid-friendly attractions at Tokyo Disneyland and the exploration-themed Tokyo DisneySea, designed for guests young and old to explore at their leisure. Tokyo Disney Resort excels at the immersive story-telling rides such as Pirates of the Caribbean, Haunted Mansion and the Indiana Jones Ride, not to mention (you guessed it) a Star Wars ride.

The park is situated about an hour by train from central Tokyo, the capital of Japan. The first Disney park to have been built outside of the US, the resort is made up of Tokyo Disneyland and Tokyo DisneySea. The latter, first opened in 2001, is a popular destination where visitors can explore different ports and attractions from Ariel’s Playground, Journey the Centre of the Earth and 20,000 Leagues Under the Sea.

You can also enjoy the waterways on one of the many boat rides available, including Venetian Gondolas, the Tom Sawyer Island Raft, Mark Twain Riverboat and the Jungle Cruise. Shanghai Disney offers a fusion of the classic Disney park elements and modern Disney fixtures such as Pirates of the Caribbean, the Marvel Universe and TRON. So whether you’re a Mickey Mouse or a Spider-Man fan, there will be something for most adults and, of course, kids to enjoy in China.

There are a number of exciting attractions to be found in Shanghai, such as futuristic TRON themed rides as well as the Marvel Universe experience. Shanghai Disney is also home to the Mandarin-language production of the beloved Lion King musical, exclusive to the Chinese resort.

If you’ve been searching for a special place to tie the knot, the resort offers a range of Fairy Tale Wedding packages hosted at the Shanghai Disney Hotel. Enjoy cocktails, a banquet and professional photography and video of the big day – you can even opt to have some of your favourite Disney characters come to visit!

Shanghai Disney has a slightly different metric for admission – height! Adult tickets are for those 1.4 metres and taller, while child tickets cover children between 1 and 1.4 metres tall. Seniors 65 years and over pay the same fee as a child (no matter their height).

Ready to book your adventure?

Meeting the Disney cast might be all fun and games, but you shouldn’t joke around when it comes to travel insurance. Check out what our policies cover here, and don’t hesitate to get in touch if you have any questions! Bali on any budget

Bali. Whether your doing it on a shoestring budget or going fully 5-stars, here's where to go and what to do while ... 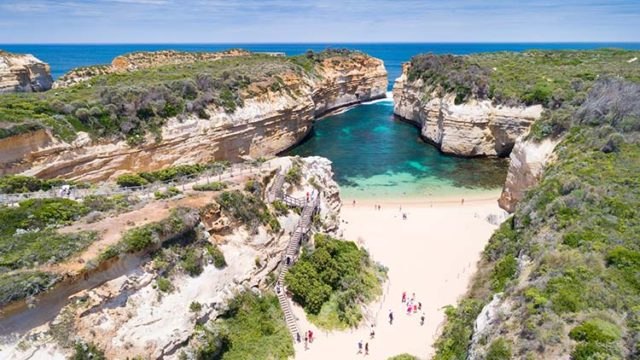