Most of us have a bucket list of beautiful places around the world we want to see, whether it’s the Grand Canyon, the Eiffel Tower or the stunning white walls and blue roofs of Santorini.

But as anyone who has queued to see the Mona Lisa will know, it’s unlikely you’ll be able to sit and ponder the wonder in solitude. Famous places mean big crowds of tourists just like you.

But what if you could marvel at a masterpiece without the crowds, how much more enjoyable would that be, and how good would your social media bragging rights be?

Here’s our list of 5 LOOK ALIKE tourist attractions you can see –  without the crowds.

One of my favourite sites in Rome is the Colosseum, but you do have to queue to buy tickets or pre-book weeks in advance… but surely it’s unique?

Nope. There’s an almost identical one in Croatia. In fact it’s better because all the walls are still standing. The Pula Arena, in the town of Pula is actually about 100 years older than Rome’s. It’s not quite as big, but like the Colosseum it was used in ancient Roman times to stage gladiator battles. More recently it has staged concerts by people such as Pavarotti. The lost Inca city of Machu Picchu is not really “lost” anymore. Hundreds of people pour out of coaches to visit the archaeological site everyday. How good would it be to visit a place like that without the crowds?

Put your hiking boots on and grab a guide, because a day and a bit walking through rugged Andean mountain territory and you are at Choquequirao.

It sits at 10,000 feet altitude, higher than Machu Picchu, so be prepared for some lung-busting exercise. But it is very similar to its neighbour.

Only a small portion of the site has been excavated, so you can step off the track and stumble upon undiscovered ruins yourself. There are only 4 or 5 groups a week visiting the site….. but we’ve probably just ruined that by mentioning it here. It’s no surprise that when it comes to buildings and structures there are similarities, but San Francisco’s iconic Golden Gate Bridge has a twin in Portugal.

The 25 Abril bridge in Lisbon is spectacular. Arriving in Lisbon from the south is exhilarating. One moment you’re on a highway then you drive straight onto a bridge that’s level with a massive cliff overlooking Lisbon. The added attraction is a large-ish statue of Christ is sitting on the roadside, a miniature of the one in Rio. 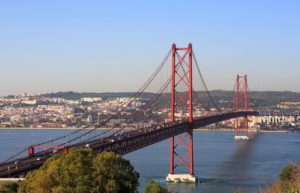 Making a Harry Potter movie cost the producers about $150-million each time, but they could have saved a lot on the Hogwarts set if they’d known about this place.

Chernivtsi university in the Ukraine is a dead ringer for the fictitious school of wizardry. And it’s not just the outside that bears a remarkable resemblance, inside it looks like exactly the right place for Harry, Hermione and Ron to cast their spells.

It’s a UNESCO listed heritage site, and has been a place of learning since the mid 1700’s. A tall, gothic tower with a large clock face and a bell, we must be talking about Big ben in London?

Or the tower of peace in Ottawa, Canada. This tower which bears a remarkable resemblance to the London twin also sits in the parliamentary precinct. In fact it’s right at the centre of the government precinct, and is a national icon. It featured on their $20 note for quite a while. This is a replacement of the original Victoria Tower which stood on this site until a terrible fire in 1916. 3 Long Weekend ideas on a budget

There’s nothing like a long weekend to break up the repetitive rhythm of daily life. With one extra day off, ... Keep your eye out for our top six Bali street foods at one of the island's many kiosks, or warung, and you're bound ...