When Eddie Peter Hobson told us about his plans to spend two years capturing every corner of the world through timelapse, hyperlapse and slowmotion film, we knew it was an adventure too good to pass up!

We spent some time getting to know our globetrotting photographer and what inspired him to ‘Capture the World‘ for those unable to make the journey.

Who is Eddie Hobson?

My name is Eddie Peter Hobson and I’m born and bred in Melbourne, Australia (with a couple years spent in the UK when I was 8, and another couple in NYC when I was 19). I recently turned 26 and have spent the last two years on the road working on the Capture the World Project.

What is Capture The World?

Capture the World’s goal is to create a series of 60 Short Films, culminating in a Feature Film using the mediums of timelapse, hyperlapse, slow motion and standard 24 frames per second film. These films focus on the natural beauty of many countries, the extraordinary architectural features of ancient and modern cities, and the rich beauty and history of some of the world’s most remarkable locations.

What do the short films involve?

What else is involved in the project?

Following this 18 month stretch of filming, I will be undertaking an additional six months of travel, capturing specific sights and natural wonders of the world. For all of these locations, the footage will be reserved exclusively for screening in the Feature Film.

What inspired you to take on this project?

To me, travel is about exploring new places, seeing different things, meeting new people and immersing yourself in unique cultures. It’s an experience that brings huge personal growth. Sadly, too many don’t get the chance to fully experience the world. So the Capture the World project isn’t just about me experiencing these places, but sharing that exploration with the world. I hope this project encourages individuals to explore the kaleidoscopic world we inhabit, and for all those who cannot make the journey, to show them the world through my eyes. How did it all begin?

In October 2012, I embarked on an epic project to capture Australia through the mediums of timelapse photography and slow motion video. I travelled by car, sea and air, in excess of 43,000 kilometers, taking more than 300,000 photos and produced the Short Film ‘Made in Australia’ and a series of smaller state based Short Films. ‘Made in Australia’ went on to win the award for Best Editing/Color at the Chronos Film Festival in LA and was shown during the G’Day USA Black Tie Gala in LA & NYC.

How did you get started in photography?

At age 19 I moved to New York City to study performing arts (studying singing, acting and dance). Upon moving back to Australia, I began work on an Australian Feature film as Director’s Attachment, and discovered my passion for the arts industry lay behind the camera. During this time I created ‘Ta-Ta Ride Productions’. Utilizing my contacts in the entertainment industry I began working as a portrait photographer in Melbourne and New York City. I developed a passion for landscape, architectural, and time-lapse photography over this time and created timelapse videos of Melbourne, Australia & New York City, before setting off to capture Australia via timelapse.

What does a typical day of shooting involve?

It always starts with coffee and ends with a cold beer. We will always try to head out to grab a sunrise shot, especially if we are creating a short film based on nature. After that it’s off to work, exploring wherever it is we are filming, and getting shots along the way. When night finally falls we do our best to be in the most picturesque location for the sunset. Once the sun goes we continue to get shots of either the amazing lights of the cities, or the stars of the wilderness. No matter where we are in the world, we always end the day downloading the 100GB+ of photos and charging the multitude of batteries that we’ve used up during the day!

What has been the best travel experience of your adventure so far?

That’s a hard one. Every destination has some unique facet that we love. Whether it is the amazing history, the architecture, the food and drink or just the atmosphere…

New Zealand will always be a highlight. 45 days in a camper van, on the road, with extraordinary natural beauty around every corner.

However, the current short film we are working on now is shaping out to perhaps be the best so far – the German Christmas Markets. We’re covering 14 cities in the span of 3 weeks. With each city displaying their unique Christmas charm, it’s certainly the best way to get into the festive spirit!

What destination are you most excited about visiting?

All of them! But if I had to pick, I think Italy. I’ve always wanted to really explore Italy and immerse myself in the culture there.

But special mention to the Cherry Blossoms of Japan, the Temple of Angkor Wat, Easter Island and so much more. Travelling on the long distance railway around Australia

Want to see Australia in style? Travel across Australia via these luxurious railway packages and take it all ... 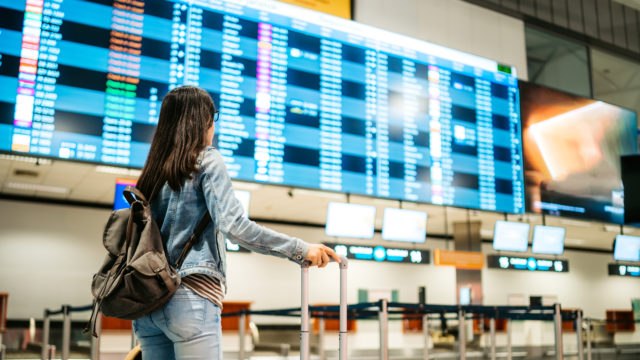 Booking flights online is a great way of scoring cheap flights. But how do you book when your itinerary involves ... Can’t bear the thought of leaving your faithful friend behind when you head off on holidays? Good news! Road ...